02/24/12—POLICY CHANGE: email [email protected] to get the .pdf file of this brochure to use at your leisure. Must be a current KCFA member.

100% Kona Coffee from Kona, Hawaii to you, with aloha.

Carefully-brewed Kona demonstrates how good American-style coffee can truly be: smooth, aromatic and balanced, brewed with arabica beans not too darkly roasted. Kona stands alone with its rich and unique flavor and wholly deserves its high standing among the specialty coffees of the world.

The coffee trees that produce Kona coffee beans, Coffea arabica, variety typica, came to Kona from Central America at the turn of the 20th Century.  The notable success of that variety stimulated its widespread planting during a coffee boom in the early 20th Century. It amazes visitors that many of those same trees remain in place, still producing today

(Photo used by permission of CBSmith)

Kona’s geographical situation is superb for coffee, and it is a bit mysterious entirely why.  The Kona district is sheltered from the gusty north-east tradewinds that dominate the climate elsewhere in Hawai`i.  Kona’s rain comes mostly from afternoon sea breezes wafting upslope most strongly in the summer months.  Its surface is steep and rocky lava, with soil of high organic content accumulating in the cracks and voids of raw lava flows.  The rugged terrain on older farms, laid out before bulldozers, demand hand labor, and a strong back and legs.  The ideal combination of seasonal summer rains and elevation for coffee groves lies between 800 and 2500 feet (240m–760m).

middle inside page of tri-fold

In a commercial climate with little legal protection for the Kona origin, coffee appreciators need to know that the “Kona” name has become the target of misuse and commercial exploitation.  This exploitation is similar to that faced by “Champagne”, “Vermont Maple Syrup” and other highly prized specialty agricultural products.  In Hawaii, current statutory law permits the marketing of the infamous “10% Kona blends”, with the name Kona writ large, but with no information at all about where the other 90% comes from.  On the Mainland, out-and-out counterfeiting often occurs.  The Kona Coffee Farmers Association is working hard to educate consumers and to bring truth-in-labeling to Kona Coffee through statutory reform and enforcement of fair marketing principles for our heritage crop.  In the meantime the best assurance of genuine, top-quality Kona coffee is for consumers to “Buy Direct” from Kona farmers.

Quality coffee production is hard, meticulous work. It appeals to people who are drawn to demanding physical challenge.  Harvesting involves six or more rounds of hand-picking during a season that may last six months or more.

The appealing red coffee fruit, or “cherry”, must be stripped of its skin in an initial “wet-milling”.  Then, a washing removes residual sweet pulp after fermenting in water overnight to loosen it from the hard seed, which must then be laid out to dry.  After a week drying in the sun on an open deck, it is ready for one more milling to remove the brittle hulls called “parchment”.  That leaves the “green coffee beans”, so-named because of their jade-green color.  Green coffee is ready to ship or roast.  Careful handling at every stage of processing creates the ultimate cup of coffee. 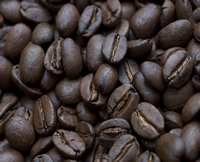 Kona’s steep, rocky lava slopes and  fitful early water supply did not attract great plantations.  It was a district dominated by cattle ranches, and small farmers who sold for cash coffee and other produce that passing ships would buy.  In hard times, subsistence farming, hunting and fishing sustained a population of native Hawaiians and a diversity of immigrant ethnic groups.  A century ago, Kona’s rural isolation, connected only by narrow trails to the rest of the Big Island, began to attract refugees from the hard life on certain sugar plantations.  They were largely ethnic Japanese, and it was their hard work and strict values that sustained the Kona coffee industry for most of the 20th Century.  As their children have left the land to become professionals in State and National life, the small farms have been taken up by recent
immigrants.

4, outside page of tri-fold

The farmers today include diverse ethnic descendants of the Kona residents who labored for most of the century and newcomers drawn to the fame of the Kona coffee tradition.  Many are serious organic farmers.  Many a coffee farmer of today was once a teacher, mechanic, nurse, professor, lawyer, physician, engineer or builder. For many, it is a second career.  Their sundry backgrounds include career farmers who once cultivated sugar, fruit trees, or wine grapes.  Many still manage jobs or a business in addition to their coffee farm.  All practice with fresh enthusiasm the horticultural craft that makes Kona coffee famous.

The coffee industry is huge.  Most of its middlemen and specialists appreciate fine coffee when they encounter it, but few have a clear notion of what it takes to cultivate this admired product of the soil.  Wouldn’t you like to talk to the farmer who grows the coffee you drink? Just ask.  The internet offers direct connections between coffee growers and their customers.   Most farmers are pleased to tell their customers about their coffee and show them around the farm when they come to Kona on vacation.

The Internet makes it easy to buy coffee from folks who offer us this delicious product of their own labor.  Go to www.KonaCoffeeFarmers.org and then click on the BUY DIRECT from the Farmer button to locate our KCFA Farmers who produce 100% Kona for sale.

outside last page of tri-fold

BACK OF BROCHURE is an excellent map of Kona Coffee Growing region, and a driving map of Towns and Communities of the Kona Coffee Region, from Kalaoa to Kealia, made by cartographer and KCFA Member MaryAnne Maigret.

Any questions? email us