About an hour was spent on changing the number of allowed defects from 5:1 equal one defect, to suggest 10:1 equal one defect. Lengthy! Ed K. brought up how much “weight’ each defect should be given.  For example, mold was worse than insect damage in value. After a long conversation about whether to call it “mold” or “fungus”, I looked it up on my iPhone, and found out that all molds are fungi but not all fungi are molds and shared that with the table.  In discussing whether to call the defect fungus or mold, I said call it “mold” because we have a good fungus, which we are applying.  Wayman gave that thumbs-up.

Spent two hours on Wayman, Manfredi, and Greenwell talking about necessary paper trail to authenticate coffee– if needed. Affidavits, C-4 form, etc. Remembering Mitch Roth’s discussion at a meeting on HB1524, I brought up the now required Certificate of Transportation.  Kahana then made copies of the new law to add to the paper pile.  I suggested that in light of HB1524 an additional record requirement would be added effort for small farmer, which Kahana and Wayman dismissed by saying:  “If we have to prove where we got our coffee, we need a record”.

This conversation and others confirmed the close personal relationship between HDOA and the Hawaii Coffee Company.  Other and longer conversations were about Greenwell and Wayman having to gather all the papers from what farmer in what lot with what code given to the bag with Ed K. asking how the mill would handle it.

At about noon, Katayama, Greenwell, Manfredi and Wayman left for a meeting with Kokubun.  I asked Greenwell later what was that about and he said, it was about the SHAC money and how to use it.  I said—“A Task Force meeting?”— Because Bob (a member of the State Task Force) didn’t know about it.  Wayman offered that at the HCA conference on Maui last week, they had an “executive session” of the State Task Force on how to use the SHAC grant money, which somehow comes under the auspices of the HCA.

We then spent at least 45 minutes on how to define “Natural” processed coffee.  Finally decided it would be of only Prime grade and may be called, for example if Maui was the origin:  “Maui Natural Prime”.   The group also considered changes to definitions and took out the term “coffea arabica” and replaced it with just “coffee.”  I objected, and Greenwell explained: “You never knew what we’d need to grow.”  I think that speaks for itself.

About 2:15pm, as the meeting was about to end, the new HCA President suggested that the discussions in the meeting should be kept “confidential” to which Kahana agreed. I said: “Confidential? We have over 300 Members who would like to know what went on at this meeting.”  Kahana replied:    “Yes, confidential because we are just discussing proposed changes and that will be followed by public hearings, and there will be plenty of time for all stakeholders to give input.”  I did not say yes, which is why you are getting this report.

My conclusion is:  I don’t know whether we need to attend these preliminary meetings. Most of the time was spent discussing grades and defects and the dumbing down of the integrity of Hawaii Coffee, and inspection is now voluntary. Instead of our having to make a trip to Oahu for $300 to attend each meeting, I tentatively asked Kahana “perhaps telephone conferences?” It is not clear that would be either possible or satisfactory.

Candidate Questionnaire
Evaluate Your Candidate before You Vote on August 11, 2012  The KCFA Legislative Committee prepared 5 questions which were sent to 35 Candidates running for Hawaii County Mayoral, Council and District offices, and State and National offices to represent YOU. Two reminders of the end date were also sent. The answers have been compiled and you can check out your Candidates’ thoughts here:  http://wp.me/p2o9ED-EC .
These are the questions we asked: 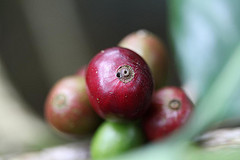 Come hear a noted IPM expert speak on CBB.  What has been successful internationally?  What is different in Hawaii? Learn about CBB behaviors, when does it swarm, when does it move into the trees. Learn proper times to spray and trap as well as effective harvest techniques. Hear a new perspective from another growing region.  Bring your best questions and get them answered. Two days of classroom and field lectures will cover effective control of the CBB pest.

Dr. Luis Aristizabal is a scientist from Colombia who has spent his career focused on control of pests in coffee.  For many years, he has done participatory research with farmers on CBB management. While with the coffee research organization, Cenicafe, he taught farmer workshops on IPM for CBB, as well as published a number of studies on biological control.  Currently with the University of Florida, he brings a unique voice to the table for Hawaiian farmers.
$25 Registration includes lunch on Friday
Online Register: http://www.kohalacenter.org/cbbworkshop/registration.html
Or contact Cortney Hoffman at 887-6411 [email protected].
Sponsored by:
KCFA, Hawaii Community Federal Credit Union, Kona Farm Bureau and The Kohala Center

Governor Fails to Follow Through on Intent to Veto HB280

HB280 repeals the system of mandatory inspection and certification of green coffee put in place in response to the Kona Kai coffee counterfeiting scandal of the mid-1990s. As described in the KCFA Press Release of 7/11/12, Governor Neil Abercrombie failed to follow through on his stated intent to veto HB280 and to protect the “Hawaii Brand”. To see the Press Release—click here.

HB283 would have transferred $196,000 out of the HDOA’s Revolving Agricultural Loan Fund and used the funds for CBB control in Hawaii County. Apparently because of concerns of “Big Ag” recipients of revolving fund loans and at the urging of the HDOA, the Governor did veto HB283.  In his public statement urging a veto of the bill, HDOA Chair Russell Kokubun stated that the HDOA would instead use $200,000 from its Imported Oil Barrel Tax allotment for CBB control. As with the Governor’s veto intent, however, there is no assurance that the HDOA will follow through on this stated intent.

HB1524 (Relating to Agricultural Theft) was signed into law by the Governor on June 15, 2012. The bill (among other things) makes it a Class C Felony for any person to transport “lots of any agricultural commodity of more than two hundred pounds or with a value of at least $100” (driving with a bag of parchment on Mamalahoa Highway?) without possessing a detailed Ownership and Movement Certificate.  Although the bill was criticized by the State Attorney General in testimony to the Legislature as containing vague and undefined provisions and not providing adequate notice of what constitutes criminal conduct, it is now law.  To read HB1524,  click here
Submitted by Bruce Corker, Chair Legislative Committee

CBB Observations on My Farm:  Bob Smith
After last season’s disaster with CBB damage approaching 80%, I thought we were doomed.  I have changed my mind.

This season (2012-2013) damage is in the 15-20% range and of that damage, a majority show fungal growth.  When I cut a damaged cherry open, most of the beans appear to be developing correctly. So what did I do?  I neither trapped nor stripped my trees- because we have an amount of cherry ripening all year long.
Starting in May 2012, I have applied Botanigard monthly and this seems to be working well.  I am keeping my fingers crossed. Good News:  We have heard the entomologist we have been wanting for 2 years, will be on the job in September and we look forward to working with him/her. We should support the entomologist in every way possible.  Lastly, make plans to attend the two-day Workshop arranged by Suzanne Shriner.  Integrated Pest Management of the CBB will be held August 24 and 25.  More info available on the KCFA website here: click here
Submitted by Bob Smith, Chair Pest & Disease Committee

New Member Barbeque – Date Change
The date for the Welcome New Member BBQ has been changed to September 30.

Come barbeque with the Fired-Up Farmers at Two Step!  New members mean New Enthusiasm and New Friends!
These barbeques are great opportunities to meet with your fellow farmers in a casual atmosphere while enjoying our wonderful coastal environment.
More information will be available in the September edition of the Newsletter.
Submitted by Mary Lou Moss, Chair  Fundraising & Social Events

Reminder
Hey all you jam and jelly makers – get busy!  We need a good supply for the Kona Coffee Cultural Festival coming up in November.
Submitted by Mary Lou Moss, Chair Fundraising & Social Events