Message from President Tom
Where has the month of November gone? The same place as the year 2015.
It is especially hard for me to slow time down when harvest is happening at the same time as the winter Holidays.  KCFA has been busy with the Coffee Festival, in particular the Coffee and Art Stroll which was a “Smashing Success”. I could only be there for the opening because of what? The harvest. I had fun while I was there but time and coffee waits for no man.
We have been actively seeking nominees for 2016’s Board of Directors. Three of the veteran directors are retiring this year, including me. It was a little frightening wondering who will replace some talented and experienced people but we have new members willing to serve who we can be excited about. I am anticipating new enthusiasm and ideas ahead and it will be thrilling to observe the changes taking place.
Come and meet the nominees at the Annual General Meeting to be held on Jan. 8th at the Kahaluu Beach Pavilion.  We set it for a Friday lunch potluck this year so as to not compete with any football playoff games.   This is a fine occasion to mingle with your friends and fellow farmers at a great setting with good food. Come and relax at the beach in the cool of the shade.
I want to remind you of two more opportunities. The EXPO, which is usually held in January, is going to be held on March 18th at the Old Airport Pavilion in 2016. The second opportunity – have a very Merry Christmas and Happy Holidays to all.
Mahalo,
Tom

The Heritage Committee Report
The Heritage Committee continues to work extensively towards recognition and protection of the Geographical Identity of Kona coffee.
The latest of the American Origin Products Association (AOPA) efforts to attain national acceptance of Kona being a geography like Napa wines, Vermont maple syrup, and Idaho potatoes continues forth!  You can read about the AOPA panels that have been held around the country via: http://cast.uark.edu/home/research/eutrd.html
While not able to attend in person, the General Assembly of oriGIn meeting in Fortaleza, Brazil, from November 10-12, 2015, resulted in the continued recognition of Kona coffee by electing Colehour Bondera to continue as the oriGIn North American Vice President.  This can be looked at via the weblink here: http://tinyurl.com/z7n87y5
Also note that a new oriGIn President has been elected, who is Fatima Amehri of the Association of the Geographical Indication of Argan Oil.  Further, the oriGIn Executive Committee includes several individuals who KCFA has worked with in the past, including Luis Fernando Samper of the National Federation of Coffee Growers of Colombia (who served as the very first oriGIn President), and Pat Kole of Idaho Potatoes who continue to serve on the AOPA BOD as well, where the KCFA representative, Colehour Bondera now is BOD Secretary.
Point is that KCFA is in very good company with our international recognition and actions to stand strong for the Kona coffee farming industry, which we are the leader of and serve as a well received spokesman for both within the US and worldwide.
–Submitted by Colehour Bondera

Dealing with Dengue Fever Infection Information
Click on this link below for information on dealing with dengue fever infection from Dr. Mata. Dehydration and possible shock are one of two important dangers to watch for, especially if you could have been exposed to dengue before. There is a few day period where one must be vigilant that the body is keeping up on fluid due to loss through porous blood vessels. One can overdo hydration as well. Listen to your body. He also says that raising the platelet count with papaya leaf juice could remove an important indicator of your body’s process.
http://solving-dengue-fever.com/
World Health Organization frequently asked questions:
http://www.who.int/denguecontrol/faq/en/index2.html
–Submitted by Kally Goschke

Legislative Update
On November 25 three members of the Legislative Committee—Judy Schuman, Colehour Bondera, and Bruce Corker—met at the West Hawaii Civic Center with 5 members of the Big Island’s State House delegation: Representatives Richard Creagan, Nicole Lowen, Mark Nakashima, Richard Onishi and Joy San Buenaventura.  The KCFA had been invited to review coffee issues for the upcoming 2016 Legislative session.  Two matters were presented to the delegation members:
1—A request for the delegation’s assistance in seeking committee hearings and passage of HB387.  This bill was introduced last session by West Hawaii Representatives Creagan, Lowen, Cindy Evans and others. It would raise the minimum content in “Hawaii Coffee Blends” to 51% and to require identification on labels of the origin of the foreign-grown coffee in a blend.
2—A request for an investigation of why the Legislature’s mandate to the Hawaii Department of Agriculture to establish a Beauvaria bassiana subsidy program for combating CBB has not been implemented.  In June of 2014, HB1514 was enacted into law. This new statute directed the HDOA to create and administer the subsidy program and appropriated $450,000 for subsidies of up to 75% of the cost of Beauvaria bassiana for the 5-year period from July 1, 2014 through June 30, 2019.  Now–almost a year and a half later–the subsidy program has not been put in place and not a single dollar of the $450,000 appropriation has been made available to coffee farmers.
–Submitted by the Legislative Committee

”Why Should I Join the KCFA?”
Many of us who are members of the Kona Coffee Farmers Association have heard this question from new coffee farmers.  The new arrivals are often unsure of the differences between the KCFA and “the other coffee organization”—the Kona Coffee Council.  A review of this year’s Kona Coffee Cultural Festival magazine illustrates how the uncertainty arises.   KCFA’s ad in the magazine says “Get Real! 100% Kona Coffee…Support Farmers”.  The KCC ad says “To promote and protect…100% Kona Coffee”.  What is the difference?
When we are asked this question, here are three points that can help new farmers understand the difference—
1–THE HISTORY: Prior to 2006 the members of KCC’s Board of Directors were coffee farmers and the KCC actively sought reform of Hawaii’s deceptive 10% coffee blend labeling law.  At the KCC’s January 2006 annual membership meeting, however, processors and buyers allied with the Honolulu blenders cast 134 “proxy votes” to take control of the KCC’s Board.  Most of the proxy votes were cast with respect to newly purchased memberships for individuals who had never participated in the organization.  Following this takeover, a group of former KCC members founded the KCFA in the spring of 2006 to give an “independent voice” to Kona’s coffee farmers, and the KCFA has actively represented the interests of farmers for the last 9 years.
2—THE LEADERSHIP: The KCC Board of Directors includes two employees of Hawaii Coffee Company (the largest producer of “10% Kona Blends”) and processors and coffee buyers who have aligned their interests with those of the blenders.  By contrast, only Kona coffee farmers can be “voting members” of the KCFA and all of the KCFA’s Directors are coffee farmers who have pledged to support the KCFA mission.  That mission is “to promote and protect Kona farmers’ economic interests in 100% Kona coffee, to protect the Kona coffee heritage, and to seek greater legal protection of the Kona coffee name.”
3—REFORM OF THE 10% BLEND LAW:  “Kona Blends” damage the reputation of genuine Kona coffee and take millions of dollars each year from the pockets of Kona Coffee farmers.  [See the Feldman Study—go to http://tinyurl.com/jotej2q   ] Since its inception the KCFA has actively worked for reform of HRS 486-120.6, the Hawaii statute that authorizes the use of the “Kona” name on packages containing 90% foreign-grown coffee.  KCFA was instrumental in the unanimous passage of Resolution No. 501-14 by the Hawaii County Council in October of last year.  That Resolution calls on the Hawaii Legislature to require a minimum of 51% genuine Kona coffee in “Kona blends” and identification on the label of the origin of the foreign-grown coffee in the package.  By contrast, since 2006 KCC Directors have repeatedly testified in opposition to changing the Hawaii’s labeling laws and the current KCC president gave testimony to the Hawaii County Council in opposition to Resolution No. 501-14.
When we meet new farmers, each of us should explain “the difference” and encourage them to join the more than 350 active KCFA members in supporting the interests of coffee farmers.
–Submitted by Bruce Corker

Unlicensed Farm Contractor Barred
The following article illustrates the need to verify that labor contractors are registered before hiring them for their services. 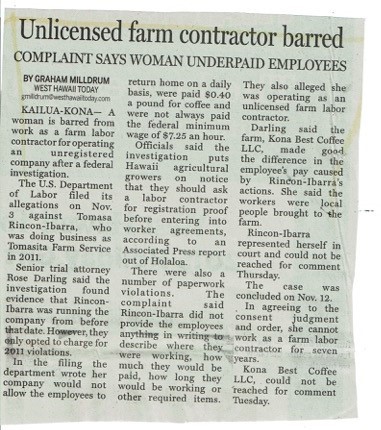 Agritourism for Small Farmers
Bill 116, which has been presented to the Hawaii County Council, will simplify the rules for small farmers engaging in agritourism. The following link discusses this bill:
http://www.westhawaiitoday.com/news/local-news/down-farm-homegrown-tourism-supplements-agricultural-income
–Submitted by Christine Coleman

Coffee Fixes Liver Damage
18 Nov 2015 at 06:04, Simon Sharwood The Register
If your liver’s packing it in after a lifetime of boozing, changing your poison may yet keep you alive a little longer.
So says Dr. Alex Hodge, a consultant gastroenterologist and liver disease specialist at Monash Health, a unit of Australia’s Monash University.
Hodge and her colleagues studied 1,100 patients with either (sic) hepatitis C, hepatitis B or fatty liver. The latter condition is often caused by heavy alcohol consumption and while it produces no symptoms can lead to liver damage. As the liver filters your blood, a less-than-optimally-operating liver is not something you want inside you.
The good news from the study is that three cups of coffee a day seem to have a positive impact on the liver. The bad news is that the improvements were most marked in Hepatitis C patients, meaning those among you whose health problems stem from bacon-munching and beer-swilling probably need to consider diet and exercise rather than extra lattes or flat whites.
Just why coffee helps the liver isn’t known: caffeine’s a well-studied compound, but coffee’s full of other chemicals and their impact on the liver remain obscure.
–Submitted by Anita Kelleher

A report published by The Specialty Coffee Chronicle (SCAA) on November 3, 2015 provides current information about a study into the CBB’s genome and how genetic material within the CBB allows it to survive and thrive eating only coffee. This leads to promise of more studies to determine how to use the information in the battle against the dreaded CBB.
Follow this link for the entire article: http://tinyurl.com/jynug48
–Submitted by Christine Coleman

Hawaiian Airlines Serving “Kona Coffee”?
Here is a link to an interesting article sent in by a KCFA member from “Road Warrior Voices” about coffees served to airline passengers.
http://roadwarriorvoices.com/2015/11/22/united-to-start-serving-illys-premium-coffee-onboard/
The article indicates that United will start serving illy’s Coffee; that Delta and Alaska Airlines serve Starbucks; and that American serves FreshBrew Coffeehouse Roast.
For Kona coffee farmers the eye-catching line in the article is:  “Hawaiian Airlines celebrates its home state’s strong coffee culture, serving Kona coffee onboard.”
Actually, Hawaiian Airlines serves a mediocre Kona Blend, but the airline is happy to have passengers and “Road Warrior Voices” believe that what is being served is “Kona Coffee”.
Next time you get the chance, tell Hawaiian Airlines representatives how disappointed you are that they are using the “Kona” name for what is 90% foreign-grown coffee.
–Link submitted by Mark Shultise 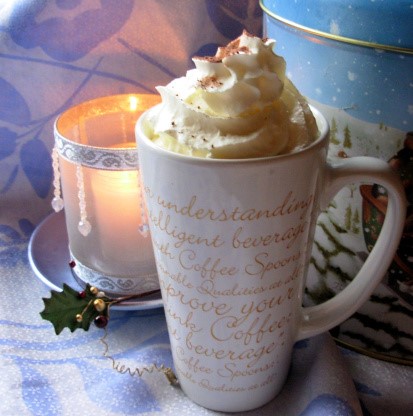 Please Write To Us!
LET US KNOW WHAT YOU THINK! >> Write us. We welcome Letters to the Editor up to 150 words. We reserve the right to edit for clarity and length.  Include your name and email address >>
Email: [email protected] with SUBJECT: Commentary.