This spring I came across a newspaper advertisement for Kona Coffee offered at a suspiciously low price by Hawaii Island Sack ‘N Save markets. Once again it appeared that our local stores are neglecting to denote the difference between Kona coffee (that is, genuine 100% Kona coffee) and that cheap, dishonest, so-called “Kona Blend” which is meant to mislead consumers.  Many tourists, and even some locals, are led to believe the “Kona Blend” to be a blend of fine Kona coffees, but in reality only one in ten beans is from Kona, while the other 9 coffee beans are alien to the Island.

All of the above was expressed to 2 Big Island Sack ‘N Save (Foodland) store managers and to the human relations and public relations representatives of Sack ‘N Save. To their credit, all were receptive to my rant and agreed that the ad was deceptive, and promised to speak to their superiors handling these issues.

One manager noted that his Big Island onion farm could make more money if he could sell them as “Maui Sweet Onions.” Would the Maui onion farmers who worked hard for generations to create and promote their product probably mind if we on other islands ripped off their great brand name? To oppose those farmers, perhaps we could make a “Maui Sweet Onion Blend” by mixing one Maui onion with 9 other onions. An eight-year-old child knows that this is stupid, yet our legislators in Oahu can’t seem to grasp that which is pono (right).  I pointed out that two other local stores—Target and Safeway—I have previously chastised for this same deception had agreed to made amends accordingly.

Later the public relations representative from Sack ‘N Save initially stated that the ad did show the “10% Blend” on the illustration of the bag of coffee included in the ad.  I pointed out that the font on the label was illegible without a magnifying glass and asked if she ever read all the small print on each and every ad.  She said the ad format would not allow for any additional verbiage.  That’s when I told her she was very well versed in her response and would make a great lawyer, but in this case she doesn’t have a solid leg to stand on.  That’s when I asked her if she was a farmer and she responded, no, but her grandparents were farmers on the Big Island and, in fact, grew Kona coffee.  That’s when I let out a melodic “Ooooh” and stated “So you knowingly wish to dishonor your own ancestors’ hard work and diligence in maintaining the superior ‘Kona’ brand?”  That is when I hit home and the tune changed dramatically from “nothing can be done” to that popular tune “let’s see what we can do!”

At the end of the day I heard back from a representative of the public relations department for Foodland, wanting to provide an update.  She had met with the ad department representatives who create newspaper ads as well as with the buyers’ team representatives who submit information to the ad creators.  She said, “We figured out a way that we can add one line of qualification to the ad—so that’s really great news.  We are able to move forward to add a line stating that the coffee is a “10% blend”.  I think that we will be able to clear up any confusion when we are able to print that information in future ads. I just wanted to let you know we are resolving the issue.  Thank you for bringing it to our attention so that we could consider how we can fix it.  We certainly don’t want to mislead anyone at all—that is not our intention.  We want to support the farming community and commerce. And we really want to do the right thing. Thank you for bringing it to our attention and helping us improve.”

Hopefully farmers and supporters of local farmers will continue to speak up when we see deceptive ads or labels that undermine the heritage of the Kona Coffee brand. As with Sack ‘N Save, vendors often respond positively when deceptive marketing is brought to their attention.
— This article was submitted by Kona resident Robert Block, a longtime supporter of Kona coffee farmers and truthful coffee labeling.

Many of you have already seen the following information about the program. I am including it here for those who may have missed it.
Aloha,

I know many of you are waiting to apply for the HDOA CBB Pesticide Subsidy Program, but while the application is being developed, I want to share a few program details with you.

2) The reimbursement program runs annually for purchases of Beauveria bassianaproducts, Botanigard/Mycotrol, made in the immediate preceding state fiscal year (July 1-June 30).  The program ends 6/30/2019 or when funds are depleted.

You can prepare ahead, and be ready to apply by ensuring you have the following items:
1) A Certificate of Vendor Compliance – go to https://vendors.ehawaii.gov/hce/splash/welcome.html create an account, then register for the certificate, which provides proof of compliance with the IRS, Department of Labor, DCCA, and State tax offices. The video on this website will guide you through the process. There is a $12. annual fee, and it could take two weeks to process your application.
2) Know your TMK number.
3) Complete the IRS form W-9, if you expect reimbursement of $600 or more. The W-9 is available at www.irs.gov/pub/irs-pdf/fw9.pdf

After you apply, you will be asked to bring your original receipts, and a Driver License or Government issued ID to the program office (address is listed below).

The application includes a survey that will provide the legislature information on the impact of the program on CBB control. Survey questions will pertain to farming and CBB, including the number of pesticide applications, spray rate, your end of season CBB infestation levels from mill, etc., and will be conglomerated and shared with the legislature. You will want to have your farm records available.

Please do not hesitate to contact me with additional questions. My goal is to have the application available online within two weeks, barring any unforeseen problems. I will email the link for the online application as soon as it is available.

Do You Know How Much Caffeine is in Your Coffee?

This may surprise you but the difference in the amount of caffeine in a cup of medium roast and dark roast is minimal; and depending on whether you measure the coffee beans by scoops or weight that minimal difference reverses. Of course this assumes the dark and the medium roast coffee are both of the same variety, such as arabica. However, canephora (var. Robusta) coffee does have more caffeine than arabica. This information is from an article in the Huffington Post dated June 27, 2016. To read the entire article, click on this link:  Coffee and caffeine.
–Submitted by Cecelia Smith

1996 Kona Kai Scandal
“A Cup of Aloha- The Kona Coffee Epic”, by Gerald Kinro- published 2003, pages 109-111
“…The identity and reputation of Kona Coffee, however, experienced a giant setback in 1996. It was discovered that Michael Norton of the Kona Kai Farms, a Berkley, California-based distributor, had purchased inferior Panamanian and Costa Rican beans and sold these as Kona Coffee at premium prices…When an informant in the U.S. Customs Service reported Norton’s activities, several agencies stepped in to investigate, including the U.S. Customs service, the Internal Revenue Service, the Food and Drug Administration and California authorities…” Link to pages 109-111 may be found here: http://wp.me/p2o9ED-EMa

KCFA Founding Member Donald Schoenholt for Tea and Coffee Magazine April/May 2001
…“We should make an effort to remember the damage he (Michael Norton) inflicted on the specialty coffee community. It is only through remembering the lessons of our history that we will know to take steps to protect our future. In our centuries old trade, where a man’s good name is everything, Norton sold ethics as a commodity of commerce. Unlike coffee beans, once sold, ethics are worthless…” Read entire article here: http://www.teaandcoffee.net/0401/special.htm

2006 Kona Coffee Farmers Association Formed
“A Brief History of (KCFA) Time” by KCFA Board Member, Louise Hanna, 2006
“…So the KCFA was formed to give the voice back to the farmers…The KCFA in its formation decided that only actual farmers could vote.  Farmers are vetted and only then are their memberships accepted by the KCFA Board to insure the continuing strength of independent Kona Coffee farmers…”

2010 Coffee Berry Borer Comes to Kona
CBB Blues by KCFA Members Jason and Kollete Stith 9/19/2011
“… I saw pictures of the borer online.  I remembered from my time in El Salvador the worried farmers there talking about “la broca”.  And I noticed all the pinholes in all the coffee all over my farm. We went from 28,000 and 24,000 lbs of cherry the previous two seasons, to about 6,000 lbs of cherry with the borer and most of that was off grade junk.  Our green coffee total was down 80% from the previous two years.  I just read my notes from the first pick of last year and I wrote “It’s basically all bad coffee…”
–Submitted by Cecelia Smith

Clothes Made out of Coffee Grounds and Plastic Bottles
Singtex, a Taiwan company, is making a fortune from coffee grounds. They have developed a process to produce fabric out of recycled plastic bottles and coffee grounds. This fabric is purchased by major sports clothing companies such as REI, Patagonia, and Timberland for environmental reasons and because the fabric reduces odors. The company also extracts coffee oil from the grounds and sells it to cosmetic and soap companies. To read this interesting article about a progressive company with an environmental conscious, click on this link: https://munchies.vice.com/en/articles/this-taiwanese-company-makes-clothes-out-of-coffee-grounds
–Submitted by Anita Kelleher

Laurie Carlson of the Hawaii Island Chapter of Slow Food has submitted a nomination and a statement of support for Kona Coffee’s inclusion in Slow Food USA’s “Ark of Taste”.  The nomination was suggested by the KCFA Branding Committee and was developed jointly by KCFA and Slow Food Hawaii.  The Ark of Taste serves as a resource for encouraging the continued production, consumption and preservation of heritage food products such as Olympia Oysters, Gravenstein Apples of Sonoma County, American Native Pecans and American Plains Bison. Foods included on the Ark of Taste list are intended to be culturally or historically linked to a specific region, locality, ethnicity or traditional production practice.  Review and a determination on the Kona Coffee nomination will be made by New York-based Slow Food USA.
The US affiliate is a part of the world wide Slow Food movement, headed by the Slow Food Foundation.  It is of note that in the fall of 2010 the Slow Food Foundation chose “100% Kona Coffee” as recipient of its prestigious “International Parmigiano-Reggiano Award”, an award that honors food producers who have shown commitment to the protection of geographical origin and dedication to taste.  The Award was presented at the Salone Del Gusto festival in Turin, Italy, and received by Colehour and Melanie Bondera on behalf of the KCFA. 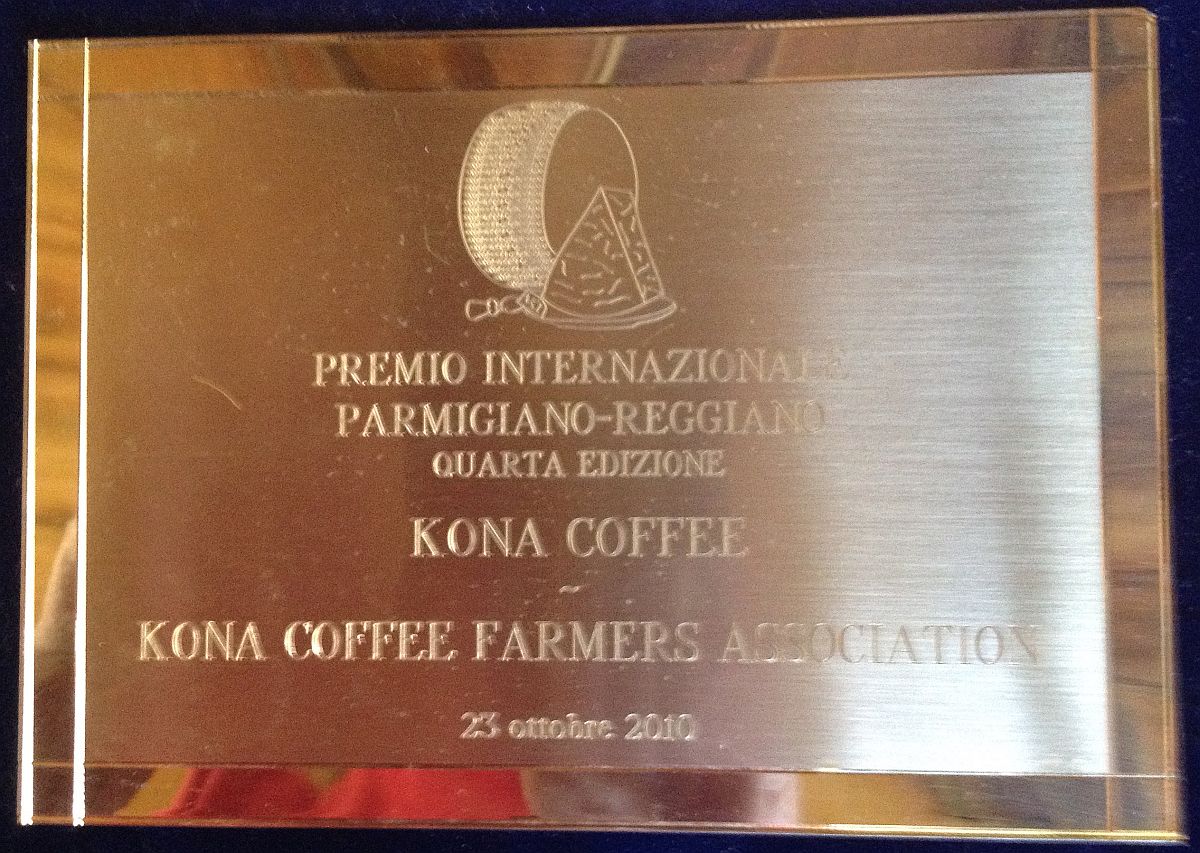 We are hopeful that inclusion in the Ark of Taste will strengthen the relationship between the Slow Food movement and the growers of Kona Coffee.
—Submitted by the Branding Committee

“It’s not uncommon to store coffee in the fridge or freezer to keep the beans fresh over long periods of time. The logic is simple, even intuitive: We keep many of our fruits and veggies from going bad by putting them in the freezer, and coffee is no different.

Except, as it turns out, it is. According to a recent study, storing coffee at lower temperatures doesn’t just keep the beans fresh: It can change the way the beans are ground which, in turn, may improve flavor…”

LET US KNOW WHAT YOU THINK! >> Write us. We welcome Letters to the Editor up to 150 words. We reserve the right to edit for clarity and length.  Include your name and email address >> Email: [email protected] with SUBJECT: Commentary.