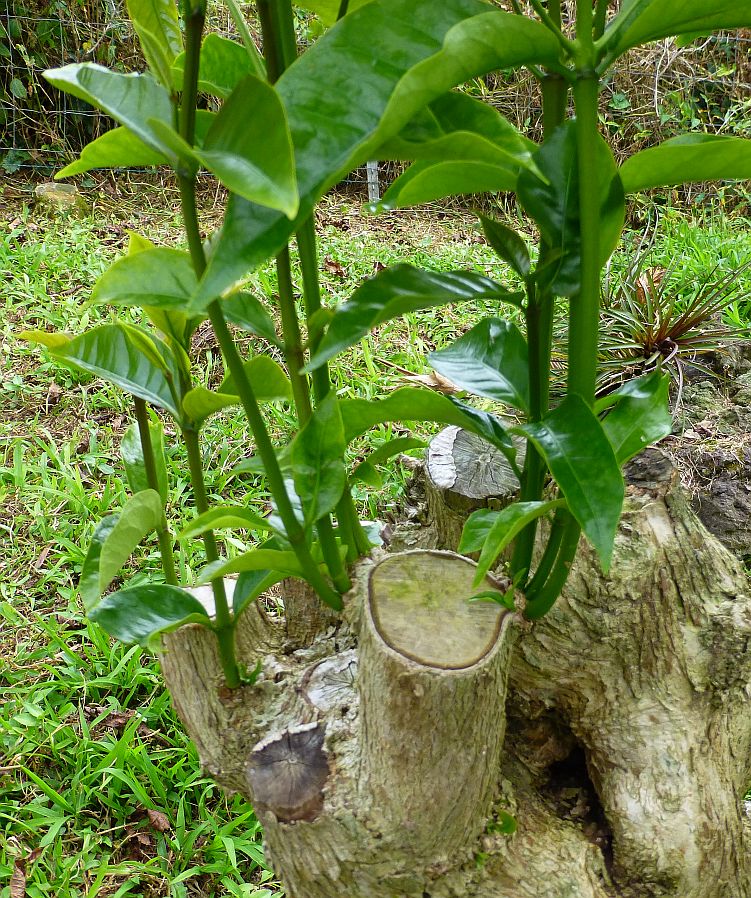 Choose the right vertical/shoots from among the new growth following the pruning completed a few months ago. Select vigorous shoots to insure high yielding verticals for the crop in three years.
Presented by Bob Nelson & Bob Smith at Bob Nelsons’ Farm located makai of the Kona Joe sign in Kainaliu, along Mamalahoa Highway. Drive down; parking available.
Please come early to park, sign in and walk down to the demonstration area.
FREE for KCFA members and $10 (can be applied towards membership) for non-members.
Learn how to best use those clippers this coming Tuesday – see you there!
–Submitted by the Education Committee

Last November, the Independent Voice included an email from KCFA member Kim Schneider expressing strong concerns over deceptively (and illegally) labeled “Kona Blend” coffee offered in the rooms at the luxury Aulani Disney Resort on Oahu. The Branding Committee forwarded a copy of that newsletter article to the Aulani and requested that the resort reconsider this deceptive practice.  The Aulani responded with a commitment to examine the issue–and now they have implemented a decision to make a change. The following message was emailed to the Branding Committee and to Kim Schneider on April 15:
>>>>>>>>>>>>>>>>>>>>>>>>
Happy aloha Friday!

After doing a little research, I have found out that we are close to transitioning to the Aulani blend. We had a bit of inventory left that we had to run through with the previous Kona Blend name; however will be receiving a shipment this week that uses up the last of the previous inventory and includes the first cases with the new “Aulani Blend” name. After this shipment, we will only be receiving “Aulani Blend” coffee to utilize in rooms.

Let me know if you have any additional questions.

Time to Fertilize Now
Don’t forget to fertilize! As you can observe, the coffee is showing signs of a growth.  Flowering is mostly pau and the cherry is developing.
The best time to fertilize is the day before a rain of course.  However one of the best indicators is how moist the ground is.
Plan ahead and buy the fertilizer and have it ready to go at a moment’s notice. The first application of the season should be a formulation high in nitrogen for growth.  For inorganic farms, 15-5-25 or 10-5-20 would be a good choice. You also want to make sure you apply a good dose per tree.  I use the rule of thumb of approximately 1 pound per tree well spread out to the estimated root radius.
Organic farms should follow the same rule.  7-7-7 would be a good choice.  Remember, you will need to apply approximately double the amount of fertilizer to achieve the equivalent amount of nitrogen.
Hope this helps and motivates everyone to fertilize.  The most common problem I see on coffee farms is a lack of fertilizer!
–Submitted by Bob Smith

Luis Aristizabal has Moved to Hawaii!

Entomologist Luis Aristizabal has joined the Hawaii fight against CBB.
Luis grew up in coffee, worked on CBB with Cenicafe in Colombia, and authored a dozen papers on the pest, including the Thirty Tree Method.
Thanks to USDA funding, he is now in Kona full time.  His goal here is to do research with farmers, on their farms.  If you are interested in joining his research project, please contact him at  [email protected] or 808-498-3657.  As the season proceeds, he will also be leading a series of seminars on different aspects of pest control, which will be announced soon.
Luis is also currently looking for a place to live.  If you are interested in having a coffee expert reside on your property, please contact him.
–Submitted by Suzanne Shriner

FINAL NOTICE regarding the fact that the KCFA grant with HDOA is over at the end of June
All expenses must be finalized by that time, and therefore please remember to get your Beauvaria bassiana stocked up before then!
Go to www.konacoffeefarmers.org/grantpplication.asp
Glad that we could help you all with this opportunity and please participate if contacted for evaluation input on impacts and how could be of better service than was.
–Submitted by Colehour Bondera

As the KCFA grant comes to a close, there are still two options for receiving subsidies for the Botanigard and Mycotrol products. One is the ongoing SHAC program, sponsored by the USDA. To participate, the grower collects data on beetle activity on their farm via the Thirty Trees method and receives a 75% subsidy in exchange. More info can be had by emailing [email protected].  The second program will be announced shortly by the HDOA.  This program will also provide a subsidy, so save your receipts.
–Submitted by Suzanne Shriner

Scammers are always trying new tricks to take your money away from you.  The email below was just received by a KCFA Member.
“From: Linh Verhague <[email protected]>

Message Body:
GoodMorning,
My name is NAME. May I kindly ask you if I can advertise in your website please? I need more visitor in my website. If you can, I will pay you 170$ monthly or we can discuss about the price.
please check my website http://nroxy.com and see if you like it maybe?
Thank you for your time!
Sincerely,
Nroxy Team
Advertising”

Red flags above include:

[NAME.]-forgot to put it in tho

an offer too good to be true, etc.
Be sure the proposed buyer acknowledges and goes through your website, or PayPal in your normal way. Never even discuss alternate methods of paying and shipping if you have any

“the members of the Hawaii County Democratic delegation in the State Legislature introduce and vigorously work for the adoption of the legislative reforms to HRS 486-120.6 requested in Hawaii County Council Resolution No. 501-14 requiring a minimum of 51% genuine content for labeling or advertising blends of coffee grown in the State of Hawaii and that the origin of all coffee in such blends be prominently and clearly identified on the primary display panel of the label.”
The resolution was proposed for consideration at the Convention by the KCFA’s Legislative Committee in order to bring an end to consumer deception and fraud and to protect the economic interests of Hawaii’s coffee farmers.

Along with other resolutions, the coffee labeling measure will be submitted by the County Democratic Party for adoption at the Hawaii State Democratic Convention in Honolulu in late May. The full text of the Resolution as adopted at the County Convention is below:

Our endangered old-growth forests not only provide Beauveria inoculum to combat borers but will be a refuge for other vulnerable species and perhaps us. Leaving ‘islands’ rather than individual Ohi’a trees etc. from old growth forests on our farms has many benefits.

“Landowners who include biodiversity as a management goal, the scientists said, could advance their aims by fostering stands with closed canopies, high biomass and complex understory vegetation.”
See:
http://oregonstate.edu/ua/ncs/archives/2016/apr/old-growth-forests-may-provide-buffer-against-rising-temperatures
–Submitted by Kally Goschke

Coffee and Gardenias are in the same Family although in a different genus.

3 tablespoons butter
3 oz. unsweetened chocolate
½ cup strong coffee
1 cup sugar
1 teaspoon vanilla
In a saucepan, melt butter and chocolate. Stir in coffee and sugar. Bring to a boil and boil gently without stirring until thick and smooth, about 10 minutes. Add vanilla.
Great on ice cream!
Adapted from The Coffee Book by Christie Katona

Please Write to Us!
LET US KNOW WHAT YOU THINK! >> Write us. We welcome Letters to the Editor up to 150 words. We reserve the right to edit for clarity and length.  Include your name and email address >> Email:[email protected] with SUBJECT: Commentary