On Tuesday, October 30, Michelle Montgomery from Hawaii Ant lab and Rob Curtiss the Kona side’s HDOA entomologist gave a KCFA Coffee Talk with a slide presentation to about 30 farmers in attendance.
“Because the Little Fire Ant (LFA) is the nastiest ant we have in Hawaii, if your farm is infested with LFA you will not find people to work on your farm- picking or pruning etc. and your pets and livestock may suffer as well”, said Montgomery.  The Little Fire Ant (LFA) can be anywhere. It can live in trees and live in the ground.  The colonies are small; however they are inter-connected to insure their survival.

“Their little stings feel like electric shocks”, according to farmer Kim Johnson who discovered them on her farm at Rabbit Hill in South Kona.  “And they itch for days”.

“As soon as a LFA colony is found, they need to be eliminated”, said Montgomery, “and there is a simple test available”. To learn more about LFA, how to test and survey your farm for LFA,  go here http://littlefireants.com/index_files/info_sheets.htm The new Kona HDOA entomologist, Rob Curtiss whose office is located in the same building as the State Tax Office in Captain Cook- will take in your LFA test and work with you. (Email:  [email protected]).

If you have LFA and if you discover it early, there is a solution and you will be on your way to helping us all.  A gel bait every 4-6 weeks, applied in sort of a random splashing method is used, no need to saturate the area, and if treated for 12 months, you will be rid of the LFA problem. 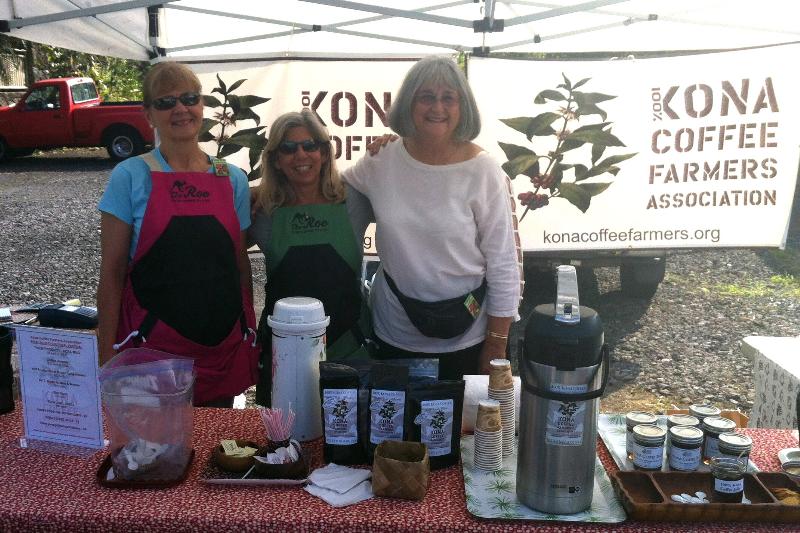 The Coffee & Art Stroll was a success!  The weather was great, the workers had fun and we made lots of sales.  Our KCFA Kona Coffee jelly was a hit, we went thru over 2 cases. The honey from the Coffee Lands was very popular too.  We sold lots of tote bags with the KCFA seal, lots of coffee label shirts as well as several KCFA logo t-shirts.  We will be at the Old Airport on November 10th for Ethnic Foods and Heritage Days from 9-3.  Stop by and see our booth and we will have the award winning Kona Coffee Farmers Association Shack on display at our tent. The KCFA’s award winning shack is always a popular fixture with kids & adults wanting to look inside and have their picture taken beside it.(Thanks also to volunteers: Ray Anders, Kurt Schweickhard, Karen Kemp, & Denny Rement.)  Submitted by Mary Lou Moss 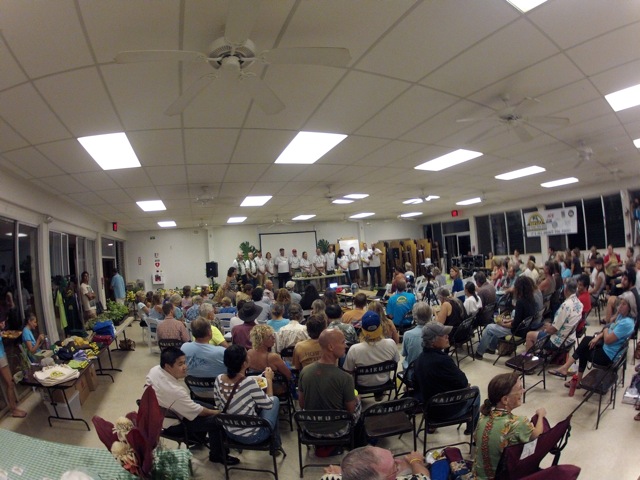 David Case attended the Hawaii Farmers Union United annual convention on Maui October 23 and a strategic planning session with National Farmers Union President, Roger Johnson who flew in from Washington, D.C. on the 24th.  The Hawaii Farmers Union has about 600 dues paying members with active chapters on Maui, Oahu, and Kauai.  Kika Welch from Hilo is organizing a chapter for East Hawaii, and KCFA has tasked David to organize a West Hawaii chapter.  HFUU appointed David as an interim member of their statewide board to advance that goal.

More than 150 people attended the Maui HFUU annual meeting on October 23rd, which was preceded by a meeting on the 22nd with legislative leaders, NFU President Johnson and HFUU officers in the Honolulu Capitol Building auditorium.  The HFUU annual meeting was scheduled to coincide with the monthly Maui Farmers Union Chapter meeting, which generally draws a crowd of over 100 for a potluck, produce exchange and farm information program.  Several prominent Maui legislators and county council members attended the meeting and potluck as well.

Maui appears to be by far the most active HFUU Chapter, and as the photo below indicates, the diversity, organization and enthusiasm of its members is truly impressive.  Oahu has an active chapter headed by Glenn Martinez, the HFUU President, with outreach to other parts of Honolulu County.  Ray Maki chairs the Kauai Chapter, which is now being reestablished under a new board.  HFUU is a growing, statewide organization whose sole mission is to represent individual and family farmers.  It prides itself on being a “grassroots” alternative to other farm organizations that generally operate from the top down with members having little opportunity to affect the organization’s policies and positions.

HFUU is presently an unchartered subdivision of the National Farmers Union, the oldest organization of farmers in the United States.  When HFUU reaches a membership threshold of about 1,250 members it will be eligible to become an NFU chapter with a seat on the NFU Board.  The purpose of the strategic planning session the day after the annual meeting was to map out the ways in which HFUU could advance that goal.  A key factor is organizing the farmers on the Big Island—particularly the coffee and other farmers in West Hawaii.  The KCFA Board voted to affiliate with HFUU earlier this year following HFUU’s active support of KCFA’s 2012 legislative agenda.  The KCFA Board also endorsed forming a Kona HFUU Chapter and appointed David Case to head up that effort.  Stay tuned for more about the benefits of HFUU individual membership.
Submitted by David Case

KCFA’s Annual General Membership Meeting to be a Fun Time

The Annual General Membership meeting of the KCFA will be on Saturday, January 12 and not be after the EXPO. This year we will have a Potluck at Kahalu’u Beach Pavilion from 2 to 6 PM.  Watch the sunset with farmer friends and enjoy the close of a day.  Let the kids play on the beach while we have the election of officers, the Annual Meeting and 2012 wrap up.
Submitted by Mary Lou Moss

Hawaii Department of Agriculture Chairman, Russell Kokubun, requested that the ad hoc CBB Task Force be legally established as a nonprofit corporation in order to receive what is likely the first $200,000 of ongoing HDOA grants to fight the coffee berry borer.  The Task Force met in response at the Sheraton Keauhou Hotel on October 10, 2012.

The Task Force agreed to form a Hawaiian nonprofit corporation to be qualified as a charitable nonprofit for educational, scientific research and other permitted charitable purposes under Section 501(c)(3) of the Federal Internal Revenue code.  Wayne Katayama requested that David Case help draft the articles of incorporation, bylaws and other documents to set up the nonprofit.

The Task Force members designated Wayne Katayama, Chris Manfredi and Jim Wayman as the initial board of directors, and allocated funds to hire legal counsel to review the documents and advise on the set-up the non-profit.  The Task Force approved retaining Darl C. Gleed and Associates LLC of Kailua-Kona as legal counsel.

KCFA appointed David Case to the Task Force at KCFA’s October Board meeting.  David then worked with Gleed’s office to draft the articles of incorporation, which the interim CBB Task Force Board reviewed.  To expedite the filing of the articles it was agreed that David would act as the incorporator and use his Kailua-Kona home address as the nonprofit’s initial business address.  Darl Gleed was designated as the nonprofit’s registered agent.  The articles were filed with the Hawaii Department of Commerce and Community Affairs on October 16, 2012.  A copy will be available at the KCFA November Board meeting for those wishing to review them.

Save the Date – 6th Annual KCFA EXPO is coming – Friday, January 25 from 9-3.  KCFA is looking for Vendors – Farmers if you provide a service to coffee farmers, why not have a table at the EXPO on Friday, January 25?  Sell your expertise to fellow farmers and attendees.  If you are interested, contact Mary Lou Moss at [email protected] or 329-4035.
Submitted by Mary Lou Moss

Upcoming! Food and Fun and Entertainment! 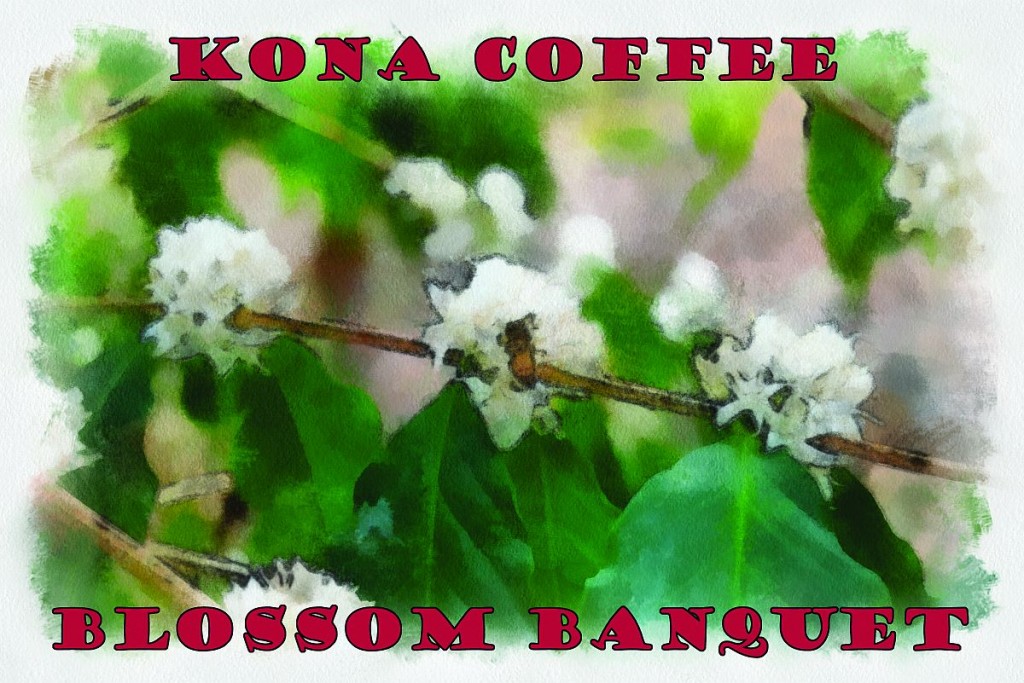 The Kona Coffee Blossom Banquet will be held on Saturday, April 20, beginning at 5 pm.  Send all your creative ideas to Mary Lou [email protected] or 329-4035 to make this year’s an even bigger success.
Submitted by Mary Lou Moss